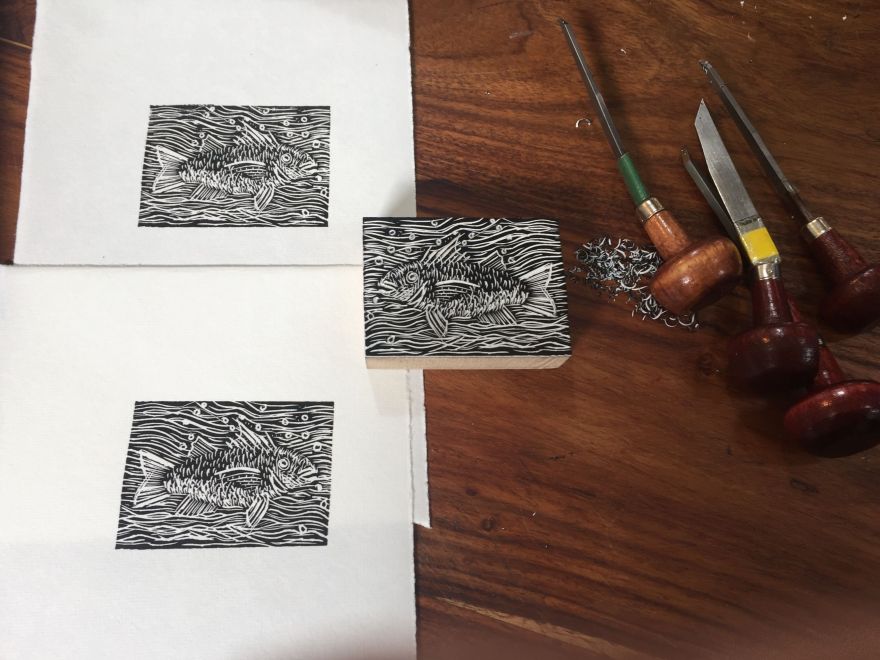 “With most of his life dedicated to the miniature and highly detailed art of wood-engraving, and the slightly larger but equally disciplined format of the linocut, his last decades saw a joyous transition to the freedom and flourish of gestural lines executed in black gouache brushmarks on vast expanses of Arches and other imported artists’ papers…….His later work, on a grand scale, is the very antithesis of the art of wood-engraving. The surety of touch and control of the medium in the late gestural works is heavily indebted to the discipline engendered by the precision necessary for meaningful wood-engraving.” ~ Jenny Zimmer, in an article about printmaker, Tate Adams.

A few weeks ago I had the great pleasure of participating in a wood engraving workshop with David Frazer at his studio in Castlemaine. This traditional craft predates linoleum, but is also a relief printing method, often used historically to illustrate pages that included letter-type. The blocks, made of box or lemonwood, are the same height as letterpress type and very durable, because the end grain is used, rather than the lateral grain of the wood. First developed at the end of the 18th century, the artisan uses much finer tools (such as an engraver’s barin) and is capable of achieving a much more detailed image compared to woodcut or linocut techniques.

David Frazer is a master with this method, producing small, intimate pieces such as “Lost”, which features a caravan surrounded by domestic animals, which he calls an “Australian Nativity scene”. He also creates much larger scale works in linocut, engraving and lithography, which are filled with the same amount of detail, creating truly impressive images.